Wow. Where to start? These cinnamon rolls are everything in my life right now. They are divine, yet so easy to make! They have taken breakfast and snack times in our household to another level.

Not to mention… They have satisfied a craving that I’ve been building up for months! Several times a week, I go and work in a coffee shop. Every time I order a coffee, I get asked: “do you want anything to eat?”. I’ve been wanting to order their deliciously smelling cinnamon rolls, but sadly they are not vegan! Not only can I now enjoy a homemade version instead, but I’m also saving a lot of money too.

I’ve made them both with normal sugar and refined sugar-free style and both options are fantastic!!

As you may know by now, around here, we like to use as few ingredients as possible in our recipes and keep things as easy as possible! Simply because saving time is our main priority. Who wants to spend all Sunday in the kitchen, am I right? To achieve that, for this recipe, you will require a bread machine!

Preparing these cinnamon rolls starts by adding the following ingredients to your bread machine:

Later on, you will need a few more ingredients:

You have to admit, this list of ingredients is short and straightforward, to make a heavenly roll happen?

How To Make Cinnamon Rolls Happen In The Bread Machine

Once you have added the dough ingredients to the bread machine, run the “dough only” function! This function should run for about one hour and 30 minutes.

Here are the basic steps: 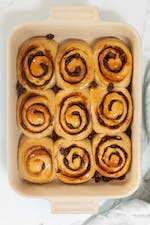 For assembling the rolls