Chakalaka has been my favorite flavor for any dish or snack, since my first few months in South Africa (nine years later, it still is). Think, chakalaka pasta, pizza, and even Simba chips. Spicy Mac and Cheese? Yes, please!

Friends, this Chakalaka Mac and Cheese is simply the BEST vegan meal prep recipe. Not only is the flavor the bomb, but made in one pot, it couldn’t be easier. It takes about 20 minutes to make (plus 20 minutes in the oven for a baked version) and uses only a few ingredients, which are also affordable. It has never been this sustainable to save the animals and the planet, am I right?

Let’s Talk About That Chakalaka

If you are not South African, you might be wondering, what on earth is chakalaka? It is a staple South African vegetable relish that is usually spicy. You can make it from scratch or buy it in a can. Dare I say that I’ve never been able to make a fresh version as good as the canned version? YES!

The canned version is quite high in oil and sodium though, making it the perfect addition to a bunch of fresh vegetables, beans, and pasta. This way, the oil and sodium in the chakalaka are diluted, yet it still offers an abundance of flavor to the overall dish!

First of all, since the whole dish is made in just one pot, you need a pot that is large enough! If you are going to make three meals, a large saute pan should do!

This Mac and Cheese starts with heating about a teaspoon or so of oil in said large enough pot. Then comes the bell pepper followed by chakalaka and macaroni pasta as well as veg broth or stock.

It is of utter importance to NOT overcook the pasta. Check your package instructions and cook for slightly shorter than the recommended cooking time. Keep in mind that you will still bake the mac and cheese.

Did you meal prep this Chakalaka Mac and Cheese recipe? Don’t forget to tag @vegan_meal_prep_sunday on Instagram, so I can find you! 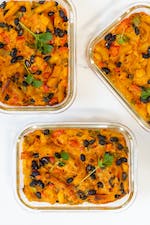 For the "cheese" sauce