I grew up eating spaghetti bolognese on a weekly basis because it was the one dish my sister and I never complained about eating as kids. Being thirty-something hasn’t stopped me from enjoying this childhood favourite – in fact, it is the dish that I meal prep most frequently!

It is a perfect mix of deliciousness and nostalgia. This vegan version also goes the extra mile because of the cost-effective dried soya mince, one of my pantry staples!

What is dried soya mince?

Soya mince is a nutritious source of protein, which is made from soya flour, the by-product that is produced when extracting soya oil. It is extremely cost-effective and easy to use, and the dehydrated form has a very long shelf-life, making it an invaluable vegan pantry staple.

Is this meal nutritionally well-balanced?

Traditionally, spaghetti bolognese is not known for being the most well-balanced dish. However, this variant includes a wide variety of veggies. It also contains plant protein in the form of soya mince, starch in the form of spaghetti and some fat.

As I’ve mentioned before, vegan meals tend to last much better throughout the week than meals that contain dairy or meat, but regardless, I recommend consuming your vegan meal prep meals within four days from preparing them.

This meal is also freezer-friendly, so if you don’t plan on consuming your meals within 4 days, just pop them in the freezer!

I recommend serving this meal hot – three minutes in the microwave should do.

The recipe for this meal is developed to make three moderate meals. If you prefer to eat large meals, you can simply double the recipe. Personally, I eat a moderate meal, while my partner eats a large meal. 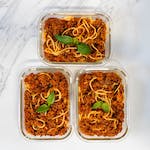 Don’t forget to share your meals with me and other fellow VMPS preppers by tagging your posts with #veganmealprepsunday. I’d love to see how your meals turned out!