Skip to content
Jump to RecipePrint RecipeRate this Recipe

Did you know that enchiladas can be the perfect meal prep?

I love to assemble them during the weekend and bake them in the oven, when I’m ready to eat them, for a delicious lazy dinner! Before serving, top them with some fresh avocado and coriander, for the perfect touch of freshness.

Enchiladas have become one of Mexico’s most popular dishes and a staple in households around the globe! Their origins go back a very long time – to Aztec times. Later, the first-ever Mexican cookbook published in 1831, mentioned enchiladas. Initially, enchiladas were corn tortillas folded or rolled around small fish but evolved to be flour or corn tortilla rolled around a filling and covered with sauce (enchilada).

In this post, I share my vegan meal prep take on enchiladas. Meaning, they are nutritious and well-balanced, filled with:

How To Make The Easiest Vegan Black Bean Enchiladas

This meal prep starts with roasting the veggies which will later form part of the enchilada filling! Easy!

While the veggie content is roasting, make your enchilada sauce, if you haven’t already. I like to batch cook enchilada sauce and freeze it in 1/2 or 1 cup portions, ready to use when I need it!

Once the veggies are done roasting, toss them with black beans, grated vegan cheese, and enchilada sauce for extra flavor! Your filling is now READY! So far, we agree that this is the easiest veggie-rich enchilada recipe you ever laid your eyes on, right?

In your oven-safe meal prep containers, pour some enchilada sauce. Just enough to cover the bottom! All that’s left is to fill, roll, and bake your enchiladas. Before baking them, cover them with as much or as little enchilada sauce and vegan cheese as you wish. Just make sure to cover every bit of the tortilla, so it doesn’t turn crispy nor burn.

What Are The Best Oven-Safe Containers For Meal Prep?

For meals that need to be baked in the oven, like these Vegan Black Bean Enchiladas, I swear by the LOCK & LOCK Purely Better Glass Food Storage Container with Lid. This borosilicate glass container is both microwave and oven-safe, as well as dishwasher and freezer-friendly. It doesn’t stain and has a luxurious feel to it, making it very enjoyable to eat from. It is so versatile that you can bake your meal, freeze your meal and eat your meal, all from the same bowl!

Are flour tortillas used for enchiladas?

Which enchilada sauce should I use?

You can either use store-bought enchilada sauce or you can make your own. I love batch cooking this Easy 10-Minute Enchilada Sauce and freezing it in freezer pods, to always have on hand when I need it.

Which vegan cheese should I use?

I swear by the Violife mozzarella-style shreds for vegan enchiladas. 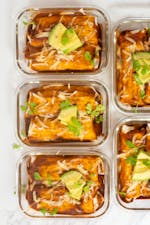 Did you meal prep this Vegan Black Bean Enchiladas Recipe? Don’t forget to let me know! Leave a comment, rate it, and don’t forget to tag @vegan_meal_prep_sunday on Instagram so I can see!

This post was all about the Easiest Vegan Black Bean Enchiladas!