All these ingredients are already yum in their own right! But, the life of the party over here is undeniably the teriyaki sauce. It is sweet, sticky, and salty and satisfies any teriyaki take-out cravings, in like no time. Just whisk soy sauce, mirin, rice vinegar, brown sugar, ginger, and garlic and you’re done!

Teriyaki in fact refers to a cooking method used in Japanese cuisine! This method involves broiling or grilling foods with a glaze traditionally made of soy sauce, mirin, and sugar (Teriyaki). However, a variety of dishes made with a teriyaki-like sauce are described using the word teriyaki. In this post, I share my vegan meal prep take on teriyaki eggplant!

To prep this copy cat take-out meal, you only need a handful of ingredients.

The first step in the process to achieving perfect teriyaki eggplant bowls is whisking together all the teriyaki sauce ingredients so that the eggplant cubes can marinate in the sauce for a good 20 minutes. In the meantime, cook the rice or whatever starch you wish to serve this dish with! Once the eggplant is done marinating, place the griddle pan on the stove and get it hot. Cook until nicely browned and is starting to char from the griddle lines. I personally like mine well-charred. Lastly, add the chickpeas to the eggplant and toss!

Divide the teriyaki eggplant and chickpeas amongst 3 meal prep containers and serve with sushi rice. Garnish with some spring onion and sesame seeds!

What Are The Best Containers For Meal Prep?

For meals that need to be reheated, like this Vegan Teriyaki Eggplant Bowl, I swear by the LOCK & LOCK Purely Better Glass Food Storage Container with Lid. This borosilicate glass container is both microwave and oven-safe, as well as dishwasher and freezer-friendly. It doesn’t stain and has a luxurious feel to it, making it very enjoyable to eat from. It is so versatile that you can bake your meal, freeze your meal and eat your meal, all from the same bowl!

Did you meal prep this Vegan Teriyaki Eggplant Bowl Recipe? Don’t forget to let me know! Leave a comment, rate it, and don’t forget to tag @vegan_meal_prep_sunday on Instagram so I can see! 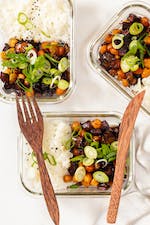