In this post, you will learn how to prep an amazing high-protein vegan burrito bowl!

Having lived only in Belgium and South Africa so far, I don’t have a lot of experience with burritos or burrito bowls, to be honest. However, every time I go through my food-filled Instagram feed, they grab my attention. They just look incredibly delicious to me. They are esentially a combination of all my favorite ingredients: rice, beans, mince vibes, red onion, and bell peppers. And, LIME + CORIANDER! Two toppings I could put on pretty much anything.

Did you know that the word burrito translates as “little donkey” from Spanish? Where the name comes from exactly is unknown, but burritos originated in Mexico somewhere in the 20th century and since gained huge popularity in the US and the rest of the world (The History Of Burritos You Might Not Know).

A burrito is a tortilla filled with ingredients such as cooked ground beef with taco seasoning, beans, shredded cheese, chopped tomatoes, onions, and salsa. A burrito bowl is essentially an array of burrito fillings, served in a bowl. Today, I share my vegan meal prep take on a burrito bowl. It features only a few ingredients, is easy to prepare, and easily lasts for up to four days in the fridge.

There are a few elements that go into these burrito bowls: rice, black beans, vegan taco meat, bell peppers and, red onion. Of course, topped with lime and fresh coriander.

The rice and black beans are pretty self-explanatory. For the vegan taco meat, you simply sauté some soya mince (also known as textured vegetable protein) with tomato puree and taco seasoning. This is the one element you can’t leave out of this bowl. It adds the sauciness that complements the rice perfectly, not to mention, a decent amount of plant protein! Then, all you need to do is add some sautéed bell pepper and red onion!

Did you meal prep this High Protein Vegan Burrito Bowl Recipe? Don’t forget to let me know! Leave a comment, rate it, and don’t forget to tag @vegan_meal_prep_sunday on Instagram so I can see! 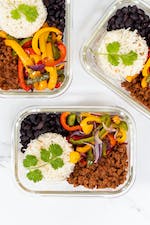 For The Burrito Bowl

For The Burrito Bowl